We need to rethink the role of midwives 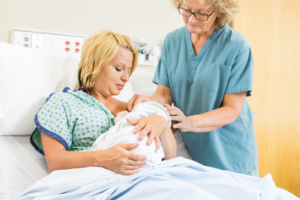 True equity of access in community and primary healthcare will only be achieved by midwives working to their full scope of practice. The midwife practices in a wellness model, understanding that most pregnancies and births are normal biological processes.

As defined by the International Confederation of Midwives, midwives work in partnership with women to give the necessary support, care and advice during pregnancy, labour and the postpartum period.  They are also skilled at recognising any problems and at involving other health professionals in a woman’s care if the need arises.  Midwifery care is associated with longer prenatal visits, more education on pregnancy and breastfeeding; prenatal counselling, fewer hospital admissions and a more positive birthing experiences for women, easing a woman’s transitioning to parenting and in meeting the demands of a new baby.

Midwife-led continuity of care – in which a pregnant woman sees the same midwife during pregnancy and labour – is associated with a higher level of spontaneous vaginal birth; the women were less likely to experience interventions such as episiotomies or use of forceps; more likely to be satisfied with their care; had a lower risk of foetal loss before 24 weeks’ gestation and at least comparable adverse outcomes for women or their infants than women who received other models of care.  Midwifery care has also been found to result in fewer women suffering from debilitating post-natal problems such as illness or injury associated with some interventions (particularly operative deliveries) and postnatal depression.

A Cochrane Systematic Review concluded that most women, unless they have significant risk factors, should have the option of midwife-led continuity of care.  (Sandall et al, 2016).

Yet midwives are constrained from working to their full scope by hospital protocols, funding models and the culture of fear that surrounds pregnancy.  Countries with low caesarean section rates and excellent maternal and perinatal outcomes are consistently rated as the best places in the world to be a mother and in all of these places midwives practice their full scope and are the main providers of maternity care, (WHO, 2015).

Privately practising midwives have demonstrated their ability to address the needs of women. However this option is only available to those who can afford it.  To fully serve all women, especially the vulnerable and disadvantaged,  midwives need appropriate access to Medicare funding.

Sadly, we know many governments, healthcare professionals and hospitals are ignoring quality maternity research.  The fact is there is inertia and vested interest distortion in maintaining the status quo.  Implementation of maternity reform agendas remains limited by the dominance of a medical/illness model rather than a wellness, social model of health. The dominant maternity system remains focused on medical risk, pathology, and hospital-based services.